Although not everyone who uses marijuana becomes addicted, when an user begins to seek out and take the drug compulsively, that person is said to be dependent on the drug or addicted to it.
As a more concentrated, resinous form it is called hashish, and as a sticky black liquid, hash oil.
Because of the drug's effects on perceptions and reaction time, users could be involved in auto crashes. Drug users also may become involved in risky sexual behaviors, which could lead to the spread of HIV, the virus that causes AIDS.
Cannabis is a term that refers to marijuana and other drugs made from the same plant. Strong forms of cannabis include sinsemilla (sin-seh-me-yah), hashish ("hash" for short), and hash oil. 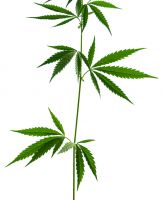 What is marijuana? Marijuana is a green or gray mixture of dried, shredded flowers and leaves of the hemp plant (Cannabis sativa). It is the most often used illegal drug in this country. All forms of cannabis are mind-altering (psychoactive) drugs because they all contain THC (delta-9-tetrahydrocannabinol). THC is the main active chemical in marijuana. There are about 400 chemicals in a cannabis plant, but THC is the one that affects the brain the most.

Marijuana side effects on the user depend on the strength or potency of the THC it contains. THC potency has increased since the 1970s but has been about the same since the mid-1980s. The strength of the drug is measured by the average amount of THC in test samples confiscated by law enforcement agencies.


Marijuana Side Effects on Men
Marijuana is the most common drug used by adolescents in America today. Marijuana side effects affect the parts of the brain which controls the sex and growth hormones. In males, marijuana can decrease the testosterone level. Occasional cases of enlarged breasts in male marijuana users are triggered by the chemical impact on the hormone system. Regular marijuana use can also lead to a decrease in sperm count, as well as increases in abnormal and immature sperm. Marijuana is a contributing factor in the rising problem of infertility in males. Young males should know the effects and potential effects of marijuana use on sex and growing process before they decide to smoke marijuana.

Marijuana Side Effects on Women
Just as in Males, marijuana side effects affect the female in the part of the brain that controls the hormones, which determines the sequence in the menstrual cycle. It has been said that females who smoked or used marijuana on a regular basis had irregular menstrual cycles, the female hormones were depressed, and the testosterone level was raised. Even though this effect may be reversible, it may take several months of no marijuana use before the menstrual cycles become normal again.

Any drug of abuse can affect a mother's health during pregnancy, and this is a time when she should take special care of herself. Drugs of abuse may interfere with proper nutrition and rest, which can affect good functioning of the immune system. Some studies have found that babies born to mothers who used marijuana during pregnancy were smaller than those born to mothers who did not use the drug. In general, smaller babies are more likely to develop health problems.

Mothers who smoke marijuana on a regular basis have been reported of having babies with a weak central nervous system. These babies show abnormal reactions to light and sound, exhibit tremors and startles, and have the high-pitched cry associated with drug withdrawal. Occurring at five times the rate of Fetal Alcohol Syndrome, Fetal Marijuana Syndrome is a growing concern of many doctors. Furthermore, doctors worry that children born to "pot-head" mothers will have learning disabilities, attention deficits and hormonal irregularities as they grow older, even if there are no apparent signs of damage at birth. Pregnant or nursing mothers who smoke marijuana should talk to their doctors immediately.

A nursing mother who uses marijuana passes some of the THC to the baby in her breast milk. Research indicates that the use of marijuana by a mother during the first month of breast-feeding can impair the infant's motor development (control of muscle movement). Research also shows more anger and more regressive behavior (thumb sucking, temper tantrums) in toddlers whose parents use marijuana than among the toddlers of non-using parents.

Marijuana Side Effects on the Brain
Researchers on marijuana side effects have found that THC changes the way in which sensory information gets into and is acted on by the hippocampus. This is a component of the brain's limbic system that is crucial for learning, memory, and the integration of sensory experiences with emotions and motivations. Investigations have shown that neurons in the information processing system of the hippocampus and the activity of the nerve fibers are suppressed by THC. In addition, researchers have discovered that learned behaviors, which depend on the hippocampus, also deteriorate. Recent research findings also indicate that long-term use of marijuana produces changes in the brain similar to those seen after long-term use of other major drugs of abuse.

Marijuana Side Effects on the Lungs
Someone who smokes marijuana regularly may have many of the same respiratory problems that tobacco smokers have. These individuals may have daily cough and phlegm, symptoms of chronic bronchitis, and more frequent chest colds. Continuing to smoke marijuana can lead to abnormal functioning of lung tissue injured or destroyed by marijuana smoke.

Regardless of the THC content, the amount of tar inhaled by marijuana smokers and the level of carbon monoxide absorbed are three to five times greater than among tobacco smokers. This may be due to the marijuana users inhaling more deeply and holding the smoke in the lungs.

Marijuana Side Effects on Heart Rate and Blood Pressure
Recent findings indicate that smoking marijuana while shooting up cocaine has the potential to cause severe marijuana side effects such as an increases in heart rate and blood pressure. In one study, experienced marijuana and cocaine users were given marijuana alone, cocaine alone, and then a combination of both. Each drug alone produced cardiovascular effects; when they were combined, the effects were greater and lasted longer. The heart rate of the subjects in the study increased 29 beats per minute with marijuana alone and 32 beats per minute with cocaine alone. When the drugs were given together, the heart rate increased by 49 beats per minute, and the increased rate persisted for a longer time. The drugs were given with the subjects sitting quietly. In normal circumstances, an individual may smoke marijuana and inject cocaine and then do something physically stressful that may significantly increase risks of overload on the cardiovascular system.